A growing list of entities—including private, state, and federal—are introducing prescription limit approaches as one tactic to combat the opioid epidemic.

According to a press release on May 7, 2018, Walmart (and its membership-only warehouse Sam’s Club) pharmacies  will soon “restrict initial acute opioid prescriptions to no more than a seven-day supply, with up to a 50 morphine milligram equivalent maximum per day.”

Walmart’s move is part of an overall Opioid Stewardship Initiative. CVS launched a similar prescription limit in February 2018 as part of its enhancement of enterprise-wide initiatives.

Some states have also moved to limit prescriptions. According to the National Conference of State Legislature’s (NCSL) tracking, since 2016, legislation has been enacted in 28 states that provides some type of guidance or requirement related to limiting opioid prescribing ranging from 3- to 14-day limits (see Figure 1). In cases where state law is more restrictive, Walmart will follow state law. 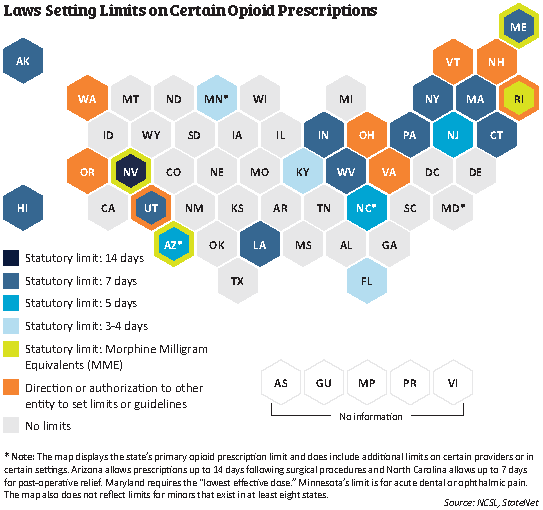 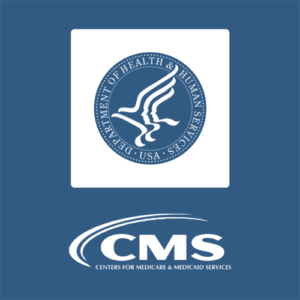 On the federal level, in April, after considerable public comment and subsequent revisions, the Centers for Medicare and Medicaid Services (CMS) released a final Medicare rule with similar limits: Part D plans are expected to impose a seven-day supply limit on initial opioid prescriptions for acute pain (with some exclusions).

These prescription limits are based on findings in the 2016 CDC Guideline for Prescribing Opioids for Chronic Pain. The CDC Guideline references data showing the likelihood of long-term opioid use increases in relationship to the length of the initial prescription (see Figure 2), which was often started for acute pain. The guideline states that, when used for acute pain, “three days or less will often be sufficient; more than seven days will rarely be needed.” (Although this statement pertains to acute pain, the majority of the guideline focuses on chronic pain outside of active cancer treatment, palliative care, and end-of-life care.)

However, these prescribing limits are controversial: supporters cite that they will help curb overprescribing and unnecessary long-term use, possibly decrease a patient’s potential of developing an addiction, and leave fewer pills available for diversion; while those opposed cite the complexity of pain management and the priority they place on decision making at the level of the prescriber.

Prescribing limits by these private, state, and federal entities are still just one approach among many aimed at curbing the opioid epidemic—but one that will likely continue to emerge, each with their own fine print.