Despite having some of the world’s highest spending on medical care, a CDC report released in December showed that the U.S. experienced a decline in life expectancy for the second year in a row in 2016.

The last time life expectancy dipped for one year was in 1993, during the worst of the AIDS epidemic. The last time it fell for two straight years was in 1962-1963, due to a high number of influenza deaths.

What’s the cause of the 2-year decline?

Drug overdoses. They are part of the “Unintentional Injuries” category (see figure), which experienced a sizeable increase making it the third leading cause of death, after heart disease and cancer.

Another CDC report, also released in December, provides a breakdown of drug overdose death data. From 2015-2016, deaths from:

Taken together, overall life expectancy dropped a tenth, from 78.7 to 78.6 years. Men are twice as likely to die of a drug overdose as women, and their life expectancy fell from 76.3 to 76.1 years, whereas women’s life expectancy remained steady at 81.1 years.

Life expectancy calculations are forward-looking projections that are influenced especially by death rates at younger ages, and that is what’s caused the current 2-year decline: from 2014 to 2016, the greatest increase in mortality was among 25- to 34-year-olds, where drug overdose deaths rose by 50%. In fact, drug overdoses are now the leading cause of death for Americans under age 50.

Some experts note that the true number of opioid deaths is likely undercounted. For example, a recent analysis found that specific drugs are frequently not identified on death certificates, and corrected opioid and heroin mortality rates in the U.S. in 2014 were actually 24% and 22% greater than previously reported rates. This suggests the opioid epidemic alone (other drug overdoses aside) is deadlier than the AIDS epidemic at its peak.

And, it’s feared the decline in life expectancy may continue, as provisional data for 2017 suggest that overdose deaths continued to rise. The last time U.S. life expectancy fell for three consecutive years was in 1918, due to the Spanish flu pandemic. 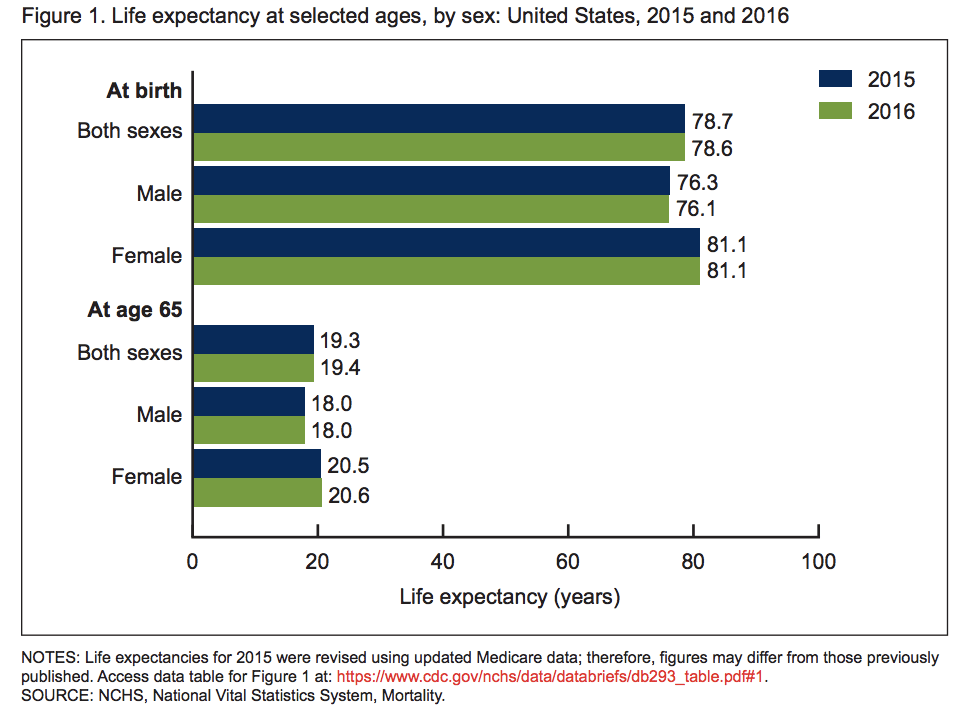